Death Speaks To No One 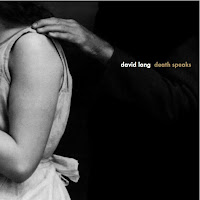 
Our unending fascination with death grants a great latitude to artists that create works on this theme. With requiems, they range from Verdi’s bombast through the gentle benedictions of Fauré’s to the soothing abstractions of the medievalists. In this last mode, death speaks, David Lang’s song cycle on his album of the same name, the text is a compilation of fragments of phrases from Schubert lieder where the singer assumes the voice of Death personified. One wonders, what can the composer know of this and how successful is his expression? He calmly invites us to a beautiful place of light – of comfort – of joy. The musical language stripped to the simplest harmonies; melodic shapes and small intervals, supported by a monochromatic sonic backdrop of repetitive phrases unique to each song; show the composer absenting himself so his audience can meditate the more deeply on his message.

These well-crafted unassuming songs are moving in a primitive way, like conceptual art whose efforts hang on a single point. That said, there is a thin line between gravity and bathos and these songs sound like spooky music, made for a TV movie by a talented yet indulgent suburban teenager. Their sincerity is an invitation to parody and ridicule. Death’s dull dishwasher celebrates static diatonic progressions? Their naïve quality is perfectly mirrored by Shara Warden’s breathy, tremulous, somewhat uneven voice, though pure of tone and pitch.

The small ensemble plays attractively, appropriate to this New-Agey music. The performers’ shimmering intonation and seamless relays are beautifully recorded and produced.

We must respect the intentions of the other work on this recording, depart, touchingly dedicated to the memory of Alexandra Montano, one of the four vocalists that drone this piece with cello. Of this piece that was written for a morgue designed by Ettore Spaletti, commissioned by the doctors of Raymond Poincaré hospital, Mr. Lang writes: “What I think is most noble about this project is not that the space or the music can really make the pain any easier to bear, but that the doctors felt morally compelled to try everything in their power to ease the suffering around them. It’s a beautiful idea.”
It is unfair to judge outside of its intended setting this contextual music which brings to mind Morton Feldman’s Rothko Chapel, or John Adams’ The Transmigration of Souls.

Of Lang’s depart, the musical symbolism is plain, the vocalists sustaining brightly clouded chords evoking an angelic choir with a cellist, endlessly repeating an ascending two-note motive in intervals no larger than a fourth. Angels fear to tread. 18 minutes long, something ‘happens’ at the eighth, ninth, 14th and 16th minute (when it was noted with relief: only two left to go….).

What is this hokum?

Still, as perhaps people are at their most vulnerable when grieving, if this music can assuage their pain and illuminate this life condition, I renounce my ambivalence and thank Mr. David Lang for making the world a better place.

Posted by crackcritic at 6:19 PM