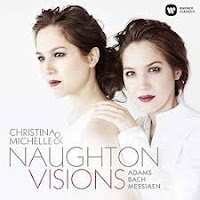 The Naughton Piano Duo was presented by WQXR in their signature Greene Space in downtown New York City for a live broadcast this past Wednesday evening.  The delightful, concise program featured the panache, elegance and remarkable ensemble these siblings are establishing their reputation with.

The works that book-ended the program were stunning. Beginning 4-handed with Mendelssohn's Andante e Allegro Brilliant, what charmed was their chiaroscuro in phrasing and texture, in dialogue and dignity; this playing had dash, not flash. Ending with Lutoslawski's Paganini Variations their incisiveness disclosed humor and bitterness, yet always cloaked in sounds so supple. Their ensemble became breathtaking to divinity in the slow variation, as natural as a cloud, or a nautilus.

The second work was a world premiere of the 2 piano arrangement of John Adams’ Roll Over Beethoven, originally his Second Quartet. Based on fragments from the Master's own Op. 110 and the Diabelli Variations, though a conceit of musical fractals is conceptual (as per the composer’s notes), this listener found this 20-minute work thin and long. It would be impressive as an improvisation at the end of a drunken musicale, but it seems not for the concert hall, though its executants were exemplary.

Following was a transcription by Kurtag; the first movement of Bach’s funeral cantata Actus Tragicus, which was a dull arrangement and lacked depth and line from a stodginess in flow.

The last movement of Messiaen's Visions de l'Amen suffered from a lack of ecstasy, sounding cluttered, melodically tedious and harmonically monotonous. However, the pianissimo section tinted like sunlight through stained glass.

It could be hoped that these brilliant young pianists will expand their sheltered lives, and come to a point when they can perform such excesses of religious delirium without sounding ersatz.

Let us be thankful that this duo is the ensemble of their generation – surpassing the Kontarsky brothers’ intellectualisms, and the Labèque sisters’ glibness.