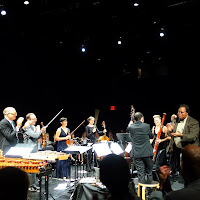 Ammonia mixed with chlorine makes mustard gas. Sauerkraut downed with sparkling water is a recipe for disaster. Cutting-edge programming used to be Schubert followed by Bartok, now it's Sweelinck paired wth Wuorinen. Tonight ICE took one (mis) step further, interspersing one or two movements at a time, of Beethoven's septet Op. 20 (1799) with the world premiere of George Lewis' Born Obbligato (2103), an ICE commission.

Might it have been better to splice the two works bar by bar, or, play them simultaneously? Despite polished star turns by violinist David Bowlin, cellist Katinka Kleijn, clarinetist Joshua Rubin and David Byrd-Marrow on horn, this juxtaposition seemed to burden the players. Intonation was not always easy. Beethoven's bumptious charm was here hard-edged and would have benefited from the subtle virtuosity of conductor Steven Schick, who directed Born Obbligato.

Mr. Lewis is a capable and experienced composer. Though well-written for the instruments in a dry academic atonal language, his composition was swamped with too many weak musical ideas. This work didn't have a chance in bed with the Beethoven, but it did get its revenge of sorts by making its older partner sound quaint and gray.

Pedagogues will point to examples from the old masters to solve compositional problems but when someone like Milton Babbitt says, about his own music: "It's just like Haydn", we're left to....scratch our heads.
Gesualdo to Schoenberg, Monteverdi to Stravinsky, Mozart to Stockhausen, Debussy to Boulez: there are infinite better ways to draw musical lines across styles. I fervently hope this conceptually silly and pretentious interweaving of movements is a blind alley.

This evening's program was like a Napoleon with sea urchin.