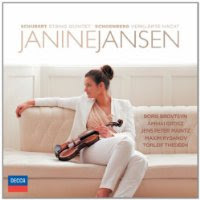 A young friend recently asked how musicians form conceptions of works and how much creativity shapes performances. His request provided a framework to compare two recent recordings of Schoenberg’s Verklärte Nacht. The Emerson Quartet is joined by Paul Neubauer and Colin Carr in an album which includes Tchaikovsky’s Souvenir de Florence, and the young star Janine Jansen and her loyal, unknown friends pair the Schoenberg with the Schubert Cello Quintet.
In classical music you need notation and imagination. There are conductors and soloists whose hopefully thoughtful interpretations are unified by their perception. In chamber music, ostensibly among equals, the level of complexity among competing aesthetics, egos and accomplishments seldom render this treacherous idiom exhilarating.


Representing the best of chamber music making is Ms. Jansen and her allies who must be named: Boris Brovtsyn; Amihai Grosz, Jens Peter Maintz, Maxim Rysanov, and Torleif Thedeen. Greater than their ravishing abilities and their seamless accordance is their concordance of conception.
Their realization of Schoenberg’s psychodrama is overwhelming.  In Verklärte Nacht, they summon a scene-by-scene dramatization of Richard Dehmel’s late romantic poem of redemption. In the Schubert, one might surmise that these musicians are dwelling on themes of life above ground and death below it. Their quintet is vivacious, yet seriously sepulchral. Their conviction in such contrasting works, abstract and programmatic, indicates less Ms. Jansen’s leadership than her acuity in surrounding herself with musicians her equal. These players have an honest connection to their deepest feelings, both nurtured and immediate.
The Emerson Quartet operates on the opposite axis.
They have been an entrenched stalwart on the scene for 25 seasons with an untold number of acclaimed performances. Despite this, there is no denying degradation - a wearying that, for all their best efforts, their  apparent refusal to engage in dialogues on grand themes limits their efforts.
Inexcusable are the treacherous sequences in both works that they relentlessly shape like parallelograms. The bustling textures sound like ants crawling over each other. The bowing in the opening of the Tchaikovsky might as well have been ten down-bows at the frog.
The beautifully tuned and perfectly balanced chords of the second movement sound like furry tarantulas due to the high voltage vibrato, and the misterioso interlude of this Adagio Cantabile is played as provocatively as a stage hand lost on the set of a period costume drama. Alas, the well articulated tunes of the last two movements are rendered tinselly by hyper motivated eighth notes. This all is a poorly pondered play.
The carefully worked out details of the obviously favored Schoenberg cannot excuse their expressionist tones - sloopy slides and vibrato fashioned from late Callas recordings.
From the cellists’ signature foghorn that intones the Verklärte Nacht, past turbulent heavings through to a coda with the fizz of a soda pop commercial, it is an overstatement to say that this recording has the commitment of a girdled frau too bored to ash her cigarette. Occasionally our friends lose themselves in the grandeur of the music and there are glimpses of genuinely beautiful playing – If only they could play like this consistently!
All too often busy musicians ‘phone in’ their parts. As students everyone churns through these masterworks, but the Emerson seems to have decided that the general conception should be a generic, middle-of-the-road, one-size-fits-all variety. At best, in their latest release, traditions have been passed down from the composer by tin can telephone.
Ideally, the conception of a composition should be ever-changing by the context of understanding it in reference to social and political history as well as the styles of the composer and his presumed relevance to the present and the future.  Ultimately it must be from an inexhaustible fascination on the performers’ part that, phrase by phrase, compulsively renders the depths of human experience.
To Ms. Jansen and her friends, thank you. Your Transfiguration I’ll bear to the grave.
~ CrackCritic
Posted by crackcritic at 11:11 AM