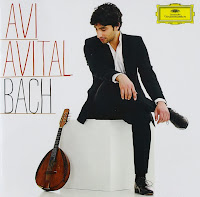 Deutsche Gramophone’s release of Mr. Avital’s auspicious debut recording of his own transcriptions with the Potsdam Akademie showcase this musician’s formidable technique. However, his arrangements and this recording suffer from irreconcilable issues of balance: why is the mandolin replacing the keyboard in the D and G minor Concertos, and the violin in the A minor? As provocative and impressive as this concept is, it is unrealistic to deny that the mandolin is not an instrument of projection, and seldom is the relationship easy between soloist and orchestra in this dense contrapuntal music.

It finally proves exasperating to chase Mr. Avitar’s silvery slivers of sound, no matter how appealing his sunny and moonlit Mediterranean disposition is. His aggressive tempi in fast movements don’t help the ensemble and despite the best efforts of the remarkably discreet harpsichordist, Shalev Ad-El, the texture is often unclear.

Most successful are the slow movements, whose elegant and subtly plucked arabesques prove nearly miraculous long legato lines. Most affecting is the largo of the g minor concerto – the strings’ pizzicato pillow sets perfectly the best of Mr. Avital’s singing. It would have been better to fill out this recording with solo Bach – say, the Flute Partita?

With theorboist Ophira Zakai and cellist Ira Givol, the sonic scheme of the E minor Flute Sonata was muddled, like dusty cobwebs in basements instead of those in forests sparkling with dew. Despite all of his accomplishments, Mr Avital’s restricted tonal spectrum make it difficult in this album to discern his unique voice.  Nevertheless, he deserves a handshake and the best of luck.
Is the world ready for a classical concert mandolinist? Let’s hope so.

Please read on to Chris Thile’s Mandolin Bach……
Posted by crackcritic at 9:12 AM