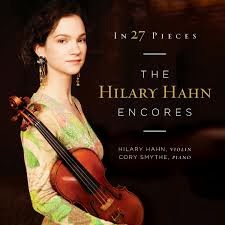 In 27 Pieces, The Hilary Hahn Encores’ program notes proclaim, “If you are captivated by a certain piece, you can acquire the score and study its architecture. If you are interested in commissioning, consider sponsoring a composer you like, be it someone close to you or someone you have always admired.” Why, yes.

Then she goes on to say: “Mesmerized… I listened for hours…Uncovering works …was intoxicating… fueled by tea and chocolates. A newly written work is like exploring a mysterious building with no apparent doors… once inside, I wander around, puzzling where I fit.”

I sincerely hope that admirers of Hilary Hahn won’t upset themselves by reading further.

This compilation speaks volumes of Ms. Hahn’s acumen (not musical) in the promotion of her reputation at the expense of her sponsors and these many talented composers.
Of these 27 short and aspiring chestnuts, let’s hazard that three might survive this ambitious project.  A couple are in the form of perpetual motion; monochromatic, yet impressive in ways brilliant and self-apparent. Jennifer Higdon’s Echo Dash is engagingly compelling with dry charm and wry wit. David Lang ’s light moving is gentle and atmospheric, admirable in its transparent construction and lack of pretension. In The Angry Birds of Kauai by Jeff Myers, if the octatonic harmonies are predictable, this character piece is handled masterfully, though the performance could have been more robust.


A roster of honorable mentions include attractive music by Tina Davidson and her Blue Curve of the Earth; Anton Garcia Abril’s pan-tonal Third Sigh, here interpreted like dozens; Nico Muhly’s Two Voices in a musically irresponsible performance and Christos Hatzis’ Coming To, well proportioned, though coming to as a finer-bred Andrew Lloyd Webber.

Mention must be made of Søren Nils Eichberg’s Levitation.
There are a few selections in the exotic category. Aalap and Tarana by Kala Ramnath and Du Yun’s When a Tiger Meets a Rosa Rugosa are rendered with a stiltedness whose ethnic effects must be excused by some misunderstanding of cultural clichés. It is strange to include Elliot Sharp’s Storm of the Eye, the one acknowledgement of non-tonal music, though sweetened here with sorbitol. In Franghiz Ali-Zadeh’s Impulse, the nuisance of hearing the music past Ms. Hahn’s playing is annoying, yet dismissible as a cloud of gnats.

Rounding out this recording is some dull whining music. Einojuhani Rautavaara’s Whispering impressed by the violinist’s tone of a willow, dying. Poor is James Newton Howard’s 133… At Least, but worse is Michuru Oshima’s Memories, perhaps of indigestion? Best suited to the flat style of the violinist are Bifū by Somei Satoh and Ford’s Farm by Mason Bates, especially fitting in angular planes. Mark-Anthony Turnage’s Hilary’s Hoedown ingratiates by its brevity.

About Cory Smythe, it is with great gingerness that an appreciation is offered. Tolerant to a the point of masochism, Hilary Hahn’s pianist plays rings around her. In the majority of this music, regardless of its strengths or weaknesses, his artistry as a professional is outstanding. One marvels at how his scope is so much richer than hers. As well as anyone can set up a star…

As admirable as this commission project is, perhaps more estimable were Ms. Hahn's ambitions.

It's possible that the pallor of grey mediocrity that characterizes most of these 'paid for hire' pieces reflect the stultifying musicianship of their patron and performer. With the consistency and tonal variety of a cheesecake (plain, from a Greek diner) and as flawless as her intonation may be, it is a wonder that only this skill could sustain a career.

Not sterile, nor antiseptic, but more than bland; she is bland with a hubris that dares her listeners to complain.

The positive of this balance sheet would include a posturing that can almost become self-assertive, but hers is unfortunately the nastiness of the small.
The negative side of this ledger is her insolence to flaunt her vacuity of expression, intelligence, and feeling. At least it is a unique perversion of the requisite high-gloss false aesthetic, requisite in this contemporary time.

Can we chew on her “tea and chocolate” “intoxication,” to “wander and explore these mysterious buildings without doors” where she “puzzles her fit?”
Posted by crackcritic at 10:32 AM