The Great Schick and His Schticks 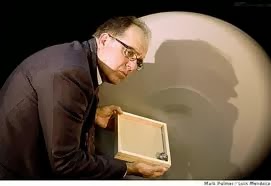 The solo percussionist Steven Schick, who has carved out a career as a brilliant champion of 20th and 21st century avant garde repertoire gave an impressive concert of the instruments’ staples Thursday last at Columbia University’s Miller Theatre, the first of  three. Nearly sold out, this was a testament to his charisma and his spiritual and socially responsible leanings. He began each of the eight selections with a Buddhist tashi delek bow towards good fortune, and for an encore recited Wendell Berry’s poem Manifesto:The Mad Farmer Liberation Front, which antagonistic people might consider socialist.

With so many young people and doubtless many percussion students in the audience, he is clearly an inspiration, a worthy mentor. As an admitted geek, how can I more than respect, but love this musician for his admission that he transcribed Varèse’s Ionisation by hand to know it better?
My concert companion well described the first half of the show as polyphonic, the second monophonic. Programmed chronologically (and performed by memory!) Stockhausen’s Zyklus was astounding in its coherence; Morton Feldman’s The King of Denmark was admirable for the most sensitive explorations of the expirations of sounds. The execution of Helmut Lachenmann’s Interieur  did not transcend this work’s pretentiousness, though the cymbal choir playing was spectacular. Vinko Globokar’s Toucher is a theatre piece, recited with diction and percussive equivalents that were practically exasperating in clarity.

This program proved generous to a fault, running well over two hours. Though the music making was indefatigable and irreproachable, so many eighth notes had me closing my ears by the last noisy piece, Xenakis’ Rebonds. This composer’s Psappha, a ritualistic work performed first after intermission, seemed predictable. Silver Streetcar for the Orchestra by Alvin Lucier for amplified triangle with 18 minutes of semi-quavers (indeed, Mr. Schick is a virtuoso) would have made a better impression in a different context. Another Globokar work, Corporel, was executed mostly on the upper body of the shirtless percussionist. Corporel appalled this listener; the snore was particularly cheap.

Regardless, we must laud Steven Schick as a sonic actor, perhaps a mad genius, even, for his tireless and unstinting commitment to his path.