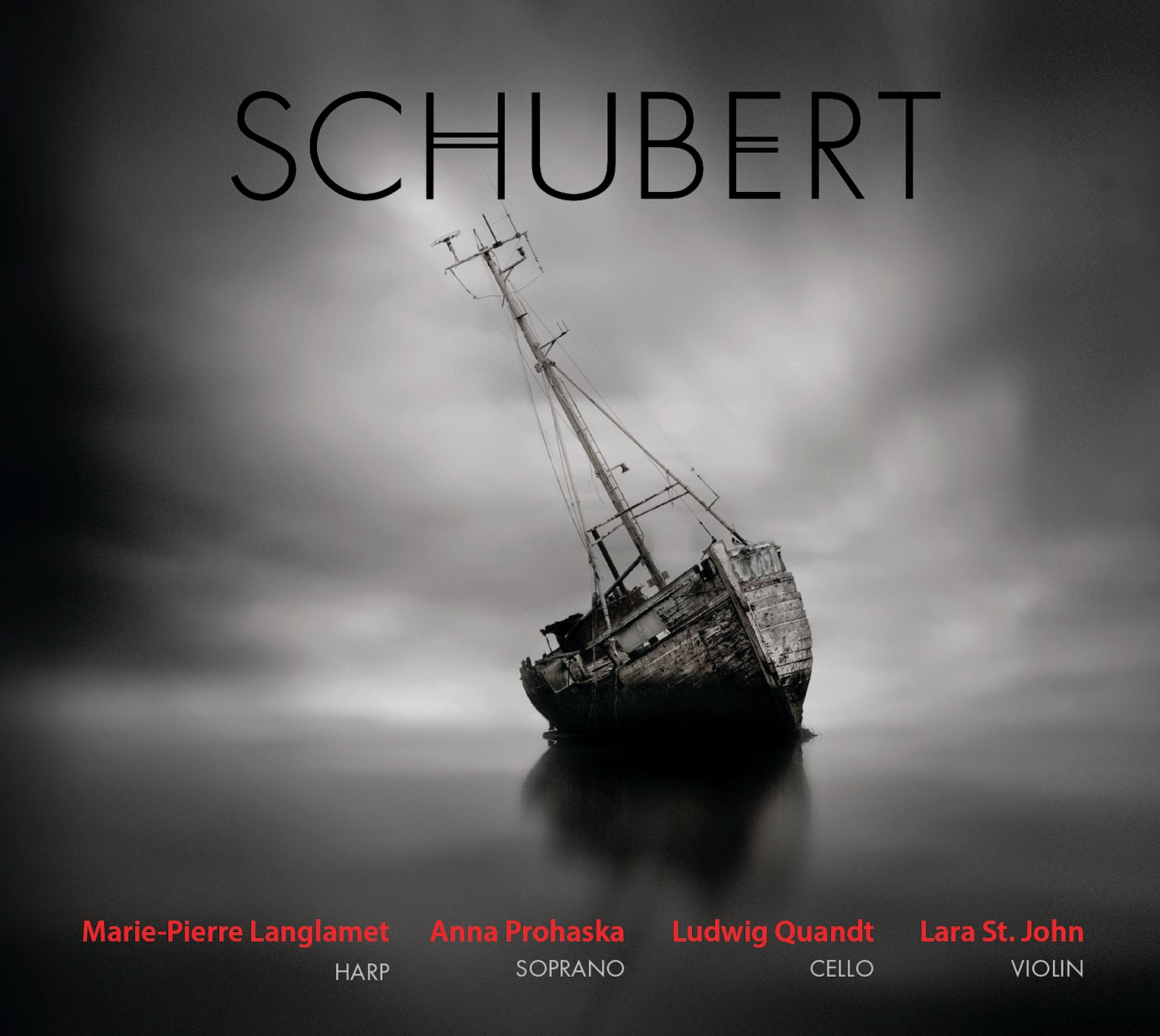 It’s as though some dank and damp late October day you sent someone down to the village seeking solace from members of the Berlin Philharmonic. Only Schubert could assuage your Weltschmerz. To your castle they sent their soloists: harpist Marie Pierre Langlamet, cellist Ludwig Quandt and their guests Anna Prohaska, soprano and Lara St. John, violin. Such a fantastical and improbable evening was seemingly captured in a beguiling release from the Ancalagon label, sumptuously recorded and presented.
This recording belongs to Ms. Langlamet who plays on on every selection. Appropriately opening with the three Gesänge des Harfners the harp’s discretion invites a gloomy intimacy to Ms. Prohaska’s pure, sensitive tellings of despair. The D major Violin Sonatina, with all of its noble restraint, within the strictest of classical parameters paints a haunting world of ever subtly changing moods and shades.


Wonderful are three of Schubert’s Impromptus, the E-flat, G-flat and A-flat D. 899. Though the harpist’s precarious relationship with near inaudibility can distract, it is thrilling to hear her colors come literally from her fingertips, soothing as cool clear water. Wondrous is the last, striking in its crystalline, bubbling joyous articulation The drama in the minor section, in spite of its impassioned qualities, is chaste, and brings to mind Werther and Charlotte, whose story is but in glances and letters.
Fantastical too is having the harp spin out Gretchen am Spinnrade. Ms. Prohaska’s agitation feels visceral.
Long lines of the utmost virtuousness are played in a chestnut baritone by cellist Ludwig Quandt, in the Arpeggione Sonata. One wonders if it is the harp in general, or Ms. Langlamet in particular, that makes stringed instruments sound their most singing. Admirable are the felicitous tempi in the first and second movements, but the third, rarely heard so pristinely in expression, is just too moderato to round out this Sonata.
Finally, Schubert’s early “Sonatensatz’ in B-flat for Piano Trio is an unequivocal bright ray of sunshine. A more engaging and warm interpretation of this slight work cannot be imagined.

The E-flat Impromptu (No. 2) can be seen and heard in this beautiful video of Marie-Pierre:

(A bonus Ungarisches Lied for Solo Harp is available with digital download.)
Posted by crackcritic at 1:30 PM