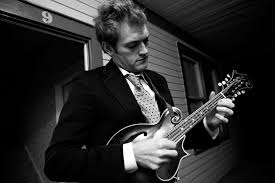 A remarkable evening was presented by the SCMS with the riches of THREE concerts in one night featuring the astonishing mandolinist Chris Thile. The only appropriate way to address this man, this Huckleberry Finn that everyone would want to have as a son, a husband, a best man, a best friend, (since Mr. Thile would be for executives bearing contracts with six zeroes which I am sure he also has) is as Chris, and his appeal is universal. Playing his instrument with an abandon of the cosmos channels his physical ululations to a scale so personal as to be conversational.

The 7 p.m. show was solo, un-amplified, and he sang and played original material in a folk/bluegrass style. There were songs and tunes about Eve, the Queen, his son learning to walk, and goats, delivered with delicious charm and wit. His segue to the classical program was the Gigue from Bach's D Minor Partita, a whirlwind of notes yet flowing with the grace of thistles riding the currents. From such a small and delicate instrument Chris' sound ranged from starbeams to the greatest orchestras.


Spilling into the next concert he opened it with two of Beethoven's works written for mandolin, the Andante and variations and the Sonatina, written when the composer was 25. It is beyond imagination to think of a more wonderful performance: such singing, such freshness, such stories that were told. Chris's original cadenza was miraculous, perfect in dimension, insouciance and style. Miraculous as well was Ms. Park, balancing his low-decibelled instrument and high-octane re-creation with great discretion, yet supporting his every nuance and color.

Continuing this brilliant night next played was Dvorak's Bagatelles by violinists James Ehnes and Amy Schwartz Moretti, with Edward Arron on cello and Andrew Armstrong pedaling the harmonium. Miraculous was the discovery that the harmonium's right bellows was leaking, and the Artistic Director repaired it with duct tape! One wonders at his skill with combustible engines, and microwaves. How Mr. Armstrong managed to thrive sweatlessly through the concert two nights before on this broken instrument is unimaginable.

Now it sounded like chocolate sauce, providing at times symphonic heft for the strings’ warm-blooded confections. With an ideal partner in Ms. Schwarz Moretti, Mr. Ehnes led the lyric movements with a tenderness more sweet than bitter. The fast 'trifles' were breathtaking in their dash, hustle, and rustle. From the violins, standing, the music gushed, but the cello seemed to compensate for being seated with over-emphasis.

After intermission Walton's Facade was recited by actor/singer Jeff Kready most entertainingly. Shameless virtuosity marked this part of the night; in the quaint near nonsense stream-of-conscious silver-threaded poems of Edith Sitwell; in William Walton's painterly lightning quick settings of every word, every innuendo; in Mr. Kready's crisp diction, and even crisper rhythm, sailing effortlessly through the torrent of words; and the panache and consummate sensitivity of the accompanying all-star septet to the styles of Walton's pastiches of inter-war genres.
The uncredited sound engineer might have increased the vocal volume in the fast patter songs for the texts to be heard over the instruments. If the handsome Mr. Kready adopted a lovely accent and had a range of humor as broad as Mr. Bean's, towards the end of these 22 numbers his imagination ebbed.

The ball was not dropped at the evening's finale at the jazz club The Triple Door across the street, starring trumpeter Jens Lindemann MCing the late show with the gusto of a strip-club barker, featuring the musicians. After a long day’s night, what this listener remembers most is not the music.