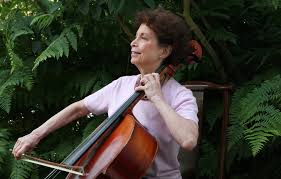 A moving and fitting tribute to cellist Toby Saks, founder and beloved director of the SCMS was a recital of two elegies featuring three cellos, one somber, the other sweet. In Lawrence Dillon's Resonance, written to mark the occasion of Ms. Saks' passing they were joined by violinist James Ehnes. This unassuming quiet work shows there are still things of greatness to say in the tonal language. Over the cello choir toned like muted trombones, the violin rhapsodized cantilenas as sad as they were dignified, both in composition and execution. Most touching was when the music came nearly to a stop as the mind that reaches a cul-de-sac remembers a loved one. The art here was the exploration of near silence, of absence.
In David Popper's Requiem the relief came from memories that are cherished. If the three cellists played as one, seamless as honey, what fascinated were their distinct personalities. Robert deMaine played with a nobility, measured, originating from his core. Edward Arron has a vitality that is almost woodsman-like. Jeremy Turner's expression is of a full throttled fearless vulnerability. Pianist Andrew Armstrong lent optimistic support.

The concert promised most, and delivered much. Ravel's Introduction and Allegro featured harpist Valerie Muzzolini Gordon. Though beguiling, this rendition was at times stiff and episodic from the immaculate approach of Ms. Gordon, and a squareness from the string quartet. The standouts were the winds, flutist Nadine Asin with a low register like a viola's C string, and the incredible Scott Williamson. Mr. Williamson does not allow himself to ever sound merely like a clarinet. With a sagesse unobtrusive to reticent, an infinite palette of colors are his gradations of texture. In this group, he was the sonic ambassador.

Puccini's I Crisantemi for string quartet did not have enough fragrance to make more than a fleeting if most pleasant impression, despite the impassioned tenor voice from Mr. Arron, not matched enough in daring by his soprano, violinist Emily Daggett Smith. Violinist Arnaud Sussmann and violist Kirsten Docter bound their leading singers with an arresting dolce.

Hindemith's Trumpet Sonata ended the first half, and pianist Jeewon Park impressed with an admirable first run of this difficult work, as was announced from the stage by trumpeter Jens Lindemann. Mr. Lindemann's lyrical assurance was at times nearly cavalier, but the arching shape of the work and its movements went unrealized. Most enjoyable was their first movement, open-aired, though Mr. Lindemann might have played in a way too blowsy as to be unimposing; or, perhaps Ms. Park did not back away enough times. The maniacal ending shone with trumpet radiance. The second movement did not have enough direction and fancy to engage, and the last lacked the inevitability towards the “All Men Must Die” ending by myopic pacing, though played by Mr. Lindemann with indefatigable endurance and consistency.

The evening ended with four arrangements of Strauss Waltzes in transcriptions by the composers of the Second Viennese School. If a brilliant concept to have Johann Strauss’s waltzes done by Schoenberg, Berg and Webern, what tired was not the time signature but the endless repeats and Da capos.
Disorienting was that the different personalities of the 20th century transcribers were not apparent, and seemed professionally motivated. I must recuse myself from opinions of this performance because of a prejudice against the harmonium, valiantly played by Mr. Armstrong on a wheezing one. It conjures musty churches with tone-deaf choirs in northern villages where they speak funny languages. The other musicians were The Ehnes Quartet and pianist Paige Roberts Molloy with an appearance by Scott Williamson. The public swooned and cheered.

Posted by crackcritic at 8:02 PM